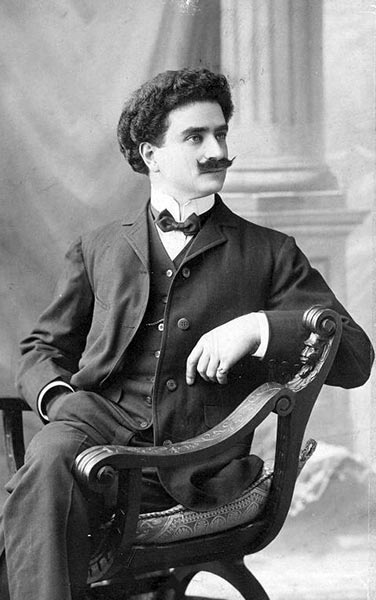 Thanks to his "Slow Waltzes" Italian born composer and unrivalled harpist Joseph Rico was widely recognized throughout France and Europe at the beginning of the 20th. His two biggest successes were: 'J'ai tant pleuré pour toi" (I've cried so much) and "Tu ne sauras Jamais" (You’ll never know). Both of which were part of
the soundtracks for several ﬁlms including Baptéme and Fortuna. In addition to his activities as a composer, he worked as an orchestral conductor and had the
privilege to perform for many of the European royal courts during the early 1900's.

He also was one of the original founders of the reed manufacturer Rico International which also bears his name.

He composed more than 200 hunched melodies which for the most part were unfortunately not recorded and only survive on manuscript and in the memories of
our grandparents. It is for that reason that we have decided to produce this album containing some of his most beautiful waltzes and serenades. You will ﬁnd
excerpts of these songs on this website under the "Waltzes & Serenades" menu.
The ofﬁcial premiere of the album took place on 7 June 2003 at the Forum du Casino in Hyreres (Var) France at the 2003 “Festival de l'Anche". Also available is
a menu entitled "Lyrics". that will no doubt evoke fond memories of the past and leave you singing these most famous songs from this golden era.

To all those who love to dance...