Two press excerpts from the begining of XX century lighting the talent of the composer Joseph Rico and his aura In the musical world of the years 1910.

“We have published today an exceptional number. the most important and most artistic to appear in our collection to date."

Few are unfamiliar with the most famous composer in contemporary music of this genre. Joseph Rico. Of Neapolitan descent. Joseph Rico evokes from his roots a peculiar charm and gracefulness that characterize his works so full of the magic found from under the Italian skies. Each new work is a fresh surprise full of unexpected charm making him the most inviting of modern songwriters.

From one award to the next, Joseph Rico's music can be found on the program at every ball, in every salon, in every orchestra and every music hall.
He has achieved a profound notoriety throughout the musical world.
His reputation has been earned through his agile and creative writing. Joseph is a handsome man and a true friend.
While conscious of his talent. he is neither pretentious nor prone to any false airs. 1'nme spent in his company is never dull thanks to an endless supply of witty and unique anecdotes.

A ﬁxture in Paris. he belongs to the French school of composers of which he is the undisputed master of salon music. From time to time he returns to his birthplace, where he sings freely from his sole the marvelous. colorful inspirations that are so characteristic of his works. 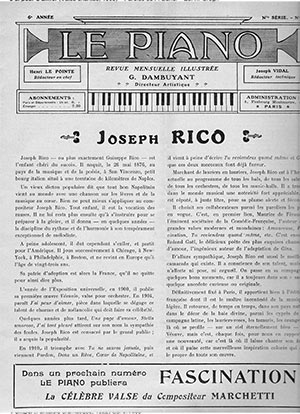