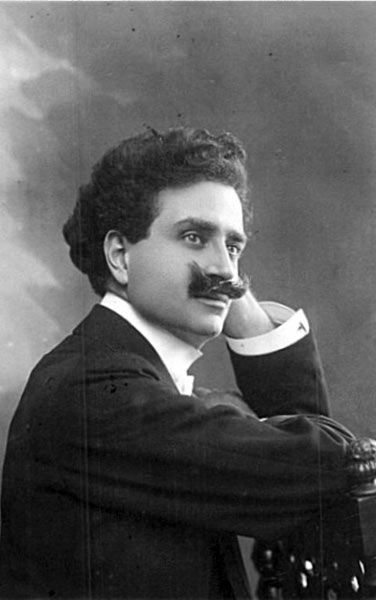 Joseph Rico was born May 27,1876 in San Vicenzo al Volturno (known today as Castel San Vicenzo), a small Italian village in Campanie. about 100
kilometers (60 miles) from Naples. He was the youngest of nine siblings. His Father, Francesco Rico was a logger and had many difficulties trying to support
such a large family. As a result, he decided to enroll his two youngest sons, Joseph (Guiseppe) and Liberato in the Monte Cassino seminary. The two Rico
brothers spent a few years in the "Lima Seminary‘ where they studied theology and music. There. they also learned to play several musical instmments.
Although his principal instmment was the harp. Joseph could also play guitar and piano. Liberato played the mandolin and violin. Their obvious talent for
music could also be seen in their gift for solfege and church music.

At the turn of the century, large waves of Italian immigrants left for the ‘new world“. Word spread to Joseph from the Naples port about the many
opportunities awaiting on the other side of the Atlantic. After some reflection, he abandoned the seminary and embarked on a steamboat for the ‘New World"
with his brother Liberato and two of his musician cousins from the Gualano family.

Soon after arriving in New York they formed an orchestra with other Italian musicians from the already burgeoning Italian community. Within a short period
of time. the Rico brothers and their orchestra became well known in the New York area and as far away as Chicago and were common musical additions at
the many marriages, baptisms, oommunions, and various evening events.

Some time later, Francesco Rico furious about their hasty departure to an unknown world, courageously heads to America in search of his sons. He
arrives in America, not speaking or writing a word of English and brings his sons home. Upon their return to Italy however. Joseph and Liberato have only
one idea in mind: to return to America. After some debate, he persuades his father to allow them to return with Assunta, one of their sisters. After their
retum to New York, they form a new orchestra. performing for audiences in Chicago, New York, Philadelphia, and Boston.

Some years later, Joseph began composing songs and tunes. setting aside the harp to become an orchestral conductor. With an ever growing passion to perfect his compositional skills, he moves back to Paris. the musical capital of the world. in search of greater musical inspiration. Upon his return to Europe at
the age of twenty-three. he leaves behind his brother Liberato as well as his sister Assunta who had just married one of his musical friends, Joseph De
Michele. Liberato returned to Italy a few years later.

He soon considered France to be his adopted homeland. spending equal time in Paris as well as the French Riviera countryside and eventually obtaining
citizenship. His first work. a waltz for Orchestra entitled “Vesuvio'. was published in 1900, the same year as the Paris Wcrld‘s Fair. “J'ai peur d‘aimer‘
(I'm afraid to love). was written in 1904 and is a fine example of his developing style known for its charming and melancholy melodies. Some years later, "Une
page d’amoui” (A page of love), “Stella amorosa" (Loving star), and "J‘ai tant pleuré“ (l've cried so much) achieved great fame. Joseph Rico’s popularity
continued to grow as did his appreciation by the greater public. In 1910, he completed his biggest success ‘Tu ne sauras jamais" (You'll never know).

He chose his lyricists from among the most fashionable colleagues from that era: Maurice de Feraudy, the eminent member of the Comédie-Francaise. the
ingenious poet Roland Gael and author of the adaptation of ‘Gina’, and George Milandy, author of his most celebrated slow waltzes “J‘ai tant pleuré” and ‘Tu ne
sauras jamais.”

Joseph and his wife Georgette had two sons, Francis and Jacques. With the support of his family. he became one of the few composers to live successfully
off of his own music !

In 1926 his nephew Frankie De Michele, daughter of Assunta sent him a letter from California. In this letter, Frankie tells him of his life in Los Angeles and his
new position as clarinetist with the Walt Disney Studios in Hollywood. He also requests that his uncle send him some clarinet reeds from France. to which his
uncle gladly obliges. The reeds. coming from a small French manufacturer, were so popular with the other clarinetists in the Hollywood studios that Frankie
continued to request more and more from his uncle. When Joseph could no longer keep up with the supply of reeds, he began to supply him with the raw
cane from the Var region of Provence. cradle of the world's supply of cane (Arundo Donax). Frankie then used this cane to make his own reeds. Thus
began in 1928. a new reed manufacturer named after Joseph. Today. Rico lntemational® has grown to become the world‘s largest reed manufacturer.

Joseph Rico achieved great popularity in France and Europe thanks to his songs, most notably his 'Valses Lentes”. In total, he composed more than two
hundred works. Three of his waltzes later became original soundtracks for began in 1928, a new reed manufacturer named alter Joseph. Today, Rico
lntemational® has grown to become the world’s largest reed manufacturer.

Joseph Rico achieved great popularity in France and Europe thanks to his songs, most notably his “Valses Lentes“. In total. he composed more than two
hundred works. Three of his waltzes later became original soundtracks for several ﬁlms: ‘J‘ai tant pleuré" in Baptéme (Baptism), “Tu ne sauras jamais” in
Fortuna (with Bourvil and Michele Morgan) and As You Desire Me. "Je ne sais pas si je vous aime' (I don‘t know if I love you) in Monsieur Klein (with Alain
Delon).

He continued his orchestral conducting alongside his composing and had the privilege to perform before all of the European royal courts in the 1900‘s.